Hello and welcome to the New Xbox Experience (NXE)!  I have been waiting for this update for about 3 months now, and I am loving it.  The new interface and avatars seem to put the 360 somewhere between the Wii and the PS3 when it comes to target audience.  Microsoft is deffinately trying to get that crowd of casual gamers on board.  Jack does not like the avatars, being too Mii-like for him, but I spent about 2 hours working on mine and his.  I only wish that they had more clothing and hair options.  There is a predominace of straight hair styles, which does not work for those of us who have curly hair.  There are 2 true curly hairstyles, and both of them look like frizzy triangle heads.  The current hairstyle on my avatar is as close as I could get, and my hair is about twice as long as that.  There are not many long hair styles either.  I am anxiously awaiting the first pack of DLC for the avatars.  I am hoping that it will be free, but i highly doubt it, knowing Microsoft.

The Netflix capabilities of the NXE are simply awesome.  Now I can watch something on my TV even if my discs get delayed in the mail!  Boo for Sony not taking the higher ground and allowing their movies on the Netflix Watch It Now.  The only irritating part of this is that you have to set up a queu of movies to stream to your 360.  No browsing from the console.  Oh well, this is not a major issue, and I always have a computer on in the house for one reason or another. 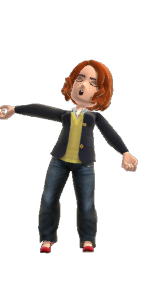 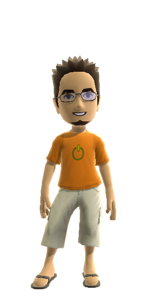 Another feature that I am enjoying is the ability to delete the 0 Gamerscore Games.  This has really helped increase my completion percentage, and has asthetically improved my gamerscore.  Those 0’s just looked ugly!

I have not had a chance to try out the party capabilities with my friends yet.  Nor have I been able to play a game that utilizes my avatar.  I am looking forward to playing the new Scene It: Box Office Smash with my avatar.

All in all, I think that this was a good move for Microsoft.  It gives their system a whole new look and feel, without them having to produce a new system!  Even though people have been complaining about the themes not looking great on the NXE, my favorite old theme looks great (Think Blue by Disruptive Publishers).  With avatars to play with, and a faster, easier to navigate interface, I give the NXE 4.5/5 stars!